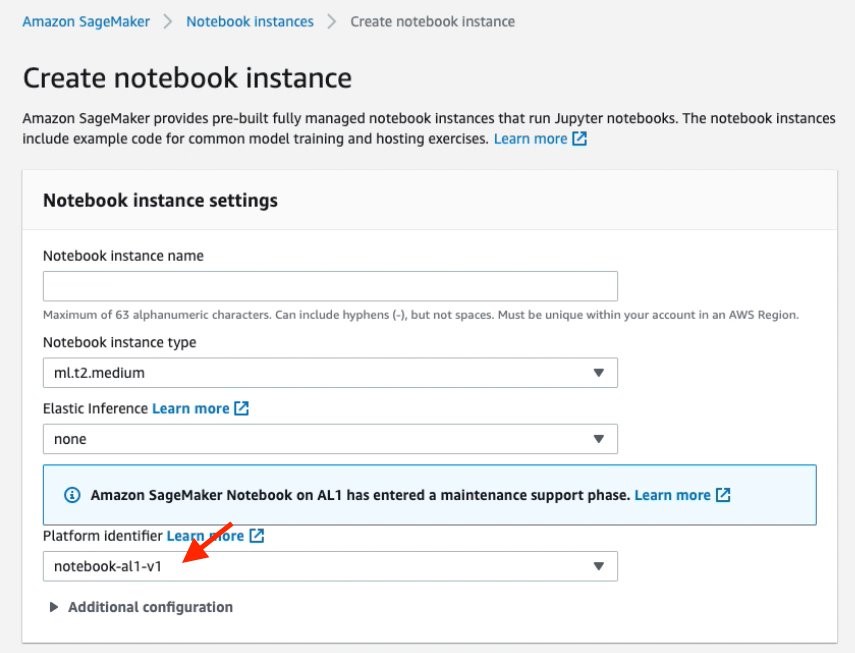 For a data scientist using SageMaker notebook instances, the major difference is the notebook kernels available in the instance. Because Python 2 has been sunset since January 1, 2020, the kernels with Python 2.x are no longer available in the Amazon Linux 2 based notebook instance. You need to port your code and notebooks from Python 2 to Python 3 before using the same code with python3.x kernels.

Another set of kernels that are no longer provided within the Amazon Linux 2 based instance are Chainer kernels (conda_chainer_p27 and conda_chainer_p36). Chainer has been in a maintenance phase since December 5, 2019, when the last major upgrade to v7 was released. Chainer users are encouraged to follow the migration guide provided by Chainer to port the Chainer code into PyTorch and use the conda_pytorch_p36 or conda_pytorch_latest_p37 in the notebook instance.

Set up an Amazon Linux 2 based SageMaker notebook instance

You can set up a SageMaker notebook instance with the Amazon Linux 2 AMI using the SageMaker console (see Create a Notebook Instance) or the AWS Command Line Interface (AWS CLI).

Michael Hsieh is a Senior AI/ML Specialist Solutions Architect. He works with customers to advance their ML journey with a combination of Amazon Machine Learning offerings and his ML domain knowledge. As a Seattle transplant, he loves exploring the great nature the region has to offer, such as the hiking trails, scenery kayaking in the SLU, and the sunset at the Shilshole Bay.

Sam Liu is a Product Manager at Amazon Web Services (AWS) focusing on AI/ML infrastructure and tooling. Beyond that, he has 10 years of experience building machine learning applications in various industries. In his spare time, he enjoys golf and international traveling.

Jun Lyu is a Software Engineer on the SageMaker Notebooks team. He has a Master’s degree in engineering from Duke University. He has been working for Amazon since 2015 and has contributed to AWS services like Amazon Machine Learning, Amazon SageMaker Notebooks, and Amazon SageMaker Studio. In his spare time, he enjoys spending time with his family, reading, cooking, and playing video games.